When I was in 3rd grade we were asked to write a letter to the POTUS. I recently came across this letter and noticed the little edit that my teacher decided to add in red. I don’t know if to be mad at the teacher for trying to force her political views on me, or to thank her for trying to open my eyes at such an early age…

God speaks to us in mysterious ways, and this time He/She chose to get the message across through polite street graffiti in Jerusalem.

That awkward moment when you’re sitting at a Jerusalem bus stop minding your own business and out of nowhere a religious girl chokes on her drink, spits it all over you, apologizes profusely, and then gives you a blessing. o_0

“Decades of failed peace talks have led nowhere; but do not lose hope just yet. Join Robert Foster as he attempts to host the first ever Middle East Peace Raps, using rhyme and reason to bring together Israeli Prime Minister Benjamin “Bibi” Netanyahu, and a representative of Hamas. We investigate the key arguments, counter-arguments and ad-hominems from both sides. But the picture would not be complete without a thorough discussion of “America’s last taboo”, as Edward Said once referred to it: the USA’s role as Israel’s best (and only) buddy in the world (Ok, together with Australia). Featuring special cameos from prominent American Jewish scholar, Dr. Norman Finkelstein, and Palestinian rap legends, DAM, this is an episode for the ages. Join us as we bravely (or perhaps stupidly) take on one of the most bitter, divisive and controversial conflicts of our times: Israel & Palestine.”

Spreading Teal Swan’s frequency art around Tel Aviv.
The cat community seems to like it =^.^= 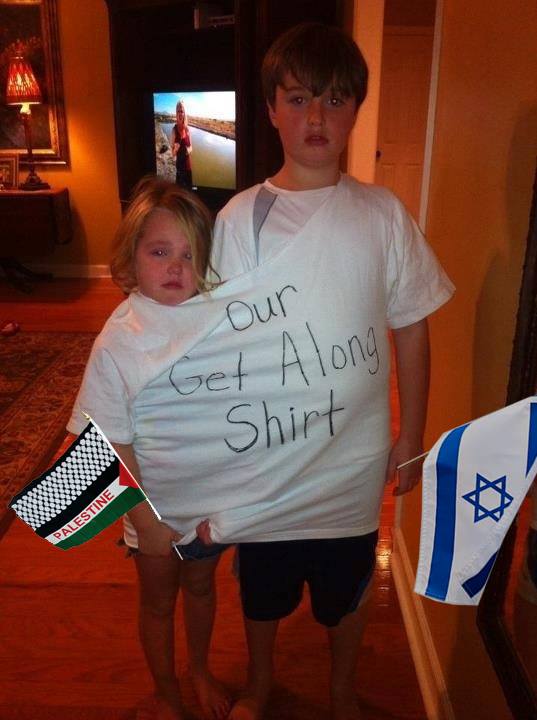 My proposal to the Middle East conflict…  I think it’s worth a shot.

Whenever anyone says anything critical about Israel, there’s always an Israeli who will compare it to other countries and say “So what if we suck, we’re still better than THEM”. What kind of fucked up logic is that? How does that serve anything? We need to stop pointing our fingers at everyone else and start looking at ourselves! Like Gandhi said: “BE the change you want to see in the world” …he did NOT say…”Compare yourself to people who suck even more than you so that you can feel better about yourself.”

Anyway, I noticed 2 Israeli girls here talking non-stop and kind of thought to myself, “Damn Israelis.” :/ Then about 5 minutes later the 2 girls overheard another man speaking Hebrew, rolled their eyes, and gave him this evil look as in, “Damn Israeli.” :/ So basically there are a bunch of Israelis here simply ignoring each other and making faces. What can I say, we are a unique species. :) 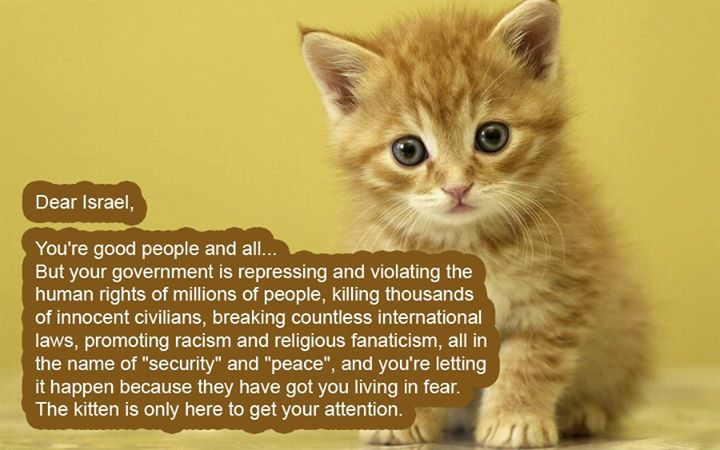 Dear Israel,
You’re good people and all…
BUT your government is repressing and violating the human rights of millions of people, killing thousands of innocent civilians, breaking countless international laws, promoting racism and religious fanaticism, all in the name of “security” and “peace”, and you’re letting it happen because they have got you living in fear.
The kitten is only here to get your attention.

NOTE: It took me over 30 years to open my eyes to what is happening. Now we wait patiently for the rest of us…

Hit the “snooze” button on the Israel-Palestine situation enough times, and eventually the clock becomes a time-bomb.
– Shira Tamir

Me to a theater full of Jewish New Yorkers as we wait for the movie “The GateKeepers” to start:

“Sooooo… What are we gonna do about those Israelis?”Them: (nervous laughter)Me: “It’s ok, I’m Israeli, I’m allowed to say that.”Them: (relieved laughter)Excellent movie, by the way… Go watch ;) 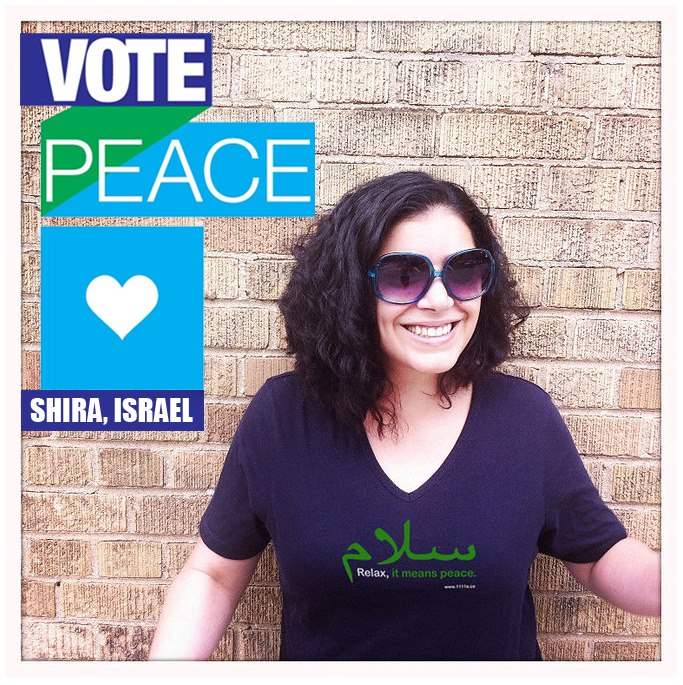 Thank you to Israel-Loves-Iran for sharing my pic on their Facebook page!Choose peace! BE peace!

P.S. I also designed this t-shirt – you can find it here.

West Bank Story is a musical comedy about David, an Israeli soldier, and Fatima, a Palestinian fast food cashier – an unlikely couple who fall in love amidst the animosity of their families’ dueling falafel stands in the West Bank.

Tensions mount when the Kosher King’s new pastry machine juts onto Hummus Hut property. The Palestinians ruin the machine and the Israelis respond by building a wall between the two eating establishments.

The couple professes their love for each other, triggering a chain of events that destroys both restaurants and forces all to find common ground in an effort to rebuild, planting a seed of hope.

Why did you make the film?

I wanted to accomplish three things with the movie:
1. I wanted to make a film that would get attention and also make people laugh.
2. I wanted to make a movie that was pro-peace and offered a message of hope.
3. I wanted to address the situation in an even-handed and balanced way so that Jewish and Arab audiences would feel fairly represented enough to let their guard down and laugh WITH the characters from the “other side”. I thought, if we can make a movie that Israelis will watch and like the Arab characters and that Arabs will watch and like the Israeli characters then that will be something valuable.

What problems did you encounter in making the film?

Many people said you can’t make a film that’s a comedy about a tragedy like the Middle East conflict. They said that no one wants to see that and you will end up offending every Jew and Arab in America. I was also advised against making a short movie that takes place in another country because it would be too expensive. They insisted I would never be able to pull it off and it would look student and cheap.

1. At first, I heeded their advice and I shelved the project for 5 months. It wasn’t until I started working with my co-writer, Kim Ray, that we returned to the project with a new perspective. We decided that it was necessary to simplify the situation in order to make it comedic. We wanted to show that both sides were more alike than they care to admit so we brainstormed a list of things that Arabs and Israelis have in common. When we came up with food and the premise of competing falafel stands, the script began to come to life.
2. A major challenge was balance in portraying both sides evenly. Our fear was that we might offend one side and then turn them off to the story. Therefore, we made sure that for every joke against one side we had one for the other. Likewise, for every endearing or heartfelt moment for the Palestinians we had to have one for the Israelis. Balance was crucial to staying credible. This balance carried over into every aspect of the film. The costumes had to be equally funny on both sides as did their restaurants and the personalities of the characters. I think we did a pretty good job of keeping it balanced.

What do you want the viewer to take away from the film?

I sometimes get remarks about the film being too simplistic and that it does not accurately show the suffering of any one side. I agree, it IS simplistic because it has to be in order to be a comedy. This film is not meant to be a learning tool for the situation in the Middle East. It is not an historical explanation, or a political solution on screen. It is a movie about HOPE and PEACE and that is it. It is meant to counteract the multitudes of negative documentaries and news reports that, while very informative, usually seem to be skewed to one side and ALWAYS leave the viewer feeling like this conflict will go on forever. I truly believe that peace between Israelis and Arabs will be achieved and don’t believe it is a hopeless endeavor. We wanted to make a film that would convey that feeling.

What has been the response from Jews and Arabs?

The response has been overwhelmingly positive from both sides. I have had requests for Dvd’s from professors from Qatar, libraries in Egypt, soldiers in Israel, Palestinian families in Gaza, Elementary school teachers in Haifa, Jewish and Arab film festivals all over the United States, and the list goes on. The film played at the Jerusalem Jewish Film Festival and the Tel Aviv University Student Film Festival in Israel. It also played at the Dubai International Film Festival to a very warm reception and was screened there more than any other film at the festival. It was one of the best screening experiences I have ever had.

What is your background? Are you from the Middle East?

I was born in the United States and am the son of an Israeli father and an American mother. I studied Islam, Judaism, and the History of the Middle East in college and have traveled the Middle East extensively having been to Israel (almost every year), Palestine, Jordan, Turkey, Egypt, Morocco, and Dubai. I currently have family that live throughout Israel.

All credits go to: http://www.westbankstory.com